In my last post I promised to write more about Fort Steele heritage town. Unfortunately, they do not advertise much so we did not know about their existence and found them by chance – just saw a sign and decided to check it. We came 20 minutes before closure at 4:40pm so they let us in without tickets just asking to donate some money. This was pretty large place and 20 minutes was definitely not enough to see everything but we decided to go there anyway.
Town of Fort Steele started as a small gold rash settlement in 1860th. Then in 1880th the railroad was built and major deposits of silver, lead and coal were discovered nearby so Fort Steele became the regions commercial, social, and administrative center and quickly grew to over 1,000 people. Finally, in 1904, the Provincial government offices were moved to Cranbrook and by 1910 Fort Steele was in a state of sharp decline.
In the late 1950’s, local citizens devoted to bringing Fort Steele back to life petitioned the Provincial Government to protect the old town. In 1961, the Government declared Fort Steele an historic park with a mandate “to preserve, present, and manage for public benefit the historic settlement of Fort Steele . . .”
Fort Steele is a living history museum. Activities there vary by season. During summer season they have street theatre, museum displays, livestock demonstrations, live theatre shows, steam train rides, horse-drawn wagon rides, and heritage trades demonstrations. We found it extremely fascinating. Some of the houses had just a display of period furniture and items but many had people working there as they would in the nineteenth century. Unfortunately, we had time to visit only a part of the town since it was closing but we saw a blacksmith and a dressmaker. They were dressed in period costumes and produced items as they were made in old days and that could be purchased there. They also had old breeds of farm animals and old farm equipment. I wish we had more time to see everything there. Luckily, we were not kicked out at 5pm and were able to wonder around for additional half an hour. I would strongly recommend anyone who is traveling close by to visit this charming piece of Canadian history. Here is their website:
http://www.fortsteele.ca/
You can also take a virtual tour:
http://fortsteele.ca/attractions/tour/#!prettyPhoto[flash]/0/
I took a lot of photos there and they are clickable to larger size: 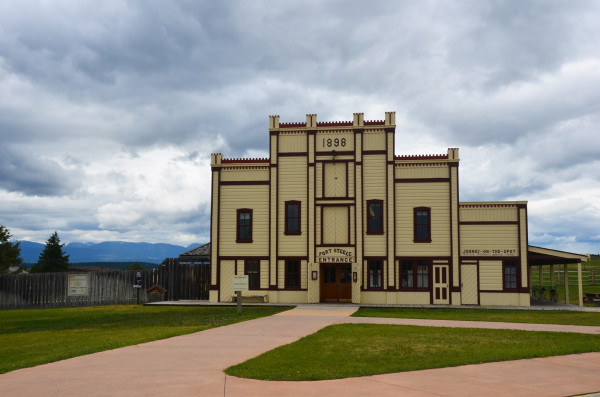