Day 3, October 10, Wednesday – We started our day with nice breakfast in our hotel. Their breakfast was provided by Manhattan Bagels so they had a variety of freshly baked bagels, cream cheese and nice choice of pastries.
Our main goal in Wilmington was Winterthur - Henry Francis Du Pont’s mansion and museum. However, there were many other interesting estates in Brandywine Valley that are associated with Du Pont’s family. We wanted to visit Nemours Mansion. The first member of this notable clan to arrive in America, Pierre Samuel du Pont de Nemours, emigrated from France with his family in 1799. Three years later one of his sons, Eleuthére Irénée, established a gunpowder plant beside the Brandywine River in Delaware. By the early 20th century, the family business had grown into the world’s largest chemical company. The Du Ponts eventually became one of the richest families in America, and they poured a good deal of their wealth into their properties. The Nemours Mansion is one of several monuments to the Du Pont dynasty. It has 102 rooms and was built in 1910 by Pierre Du Pont’s great-grandson Alfred as modified Louis XVI- style chateau. The 300-acre estate gardens that some say rival those found at the Palace of Versailles. Unfortunately, there are no walk-in tours. Visiting the Nemours Mansion requires advance reservation and they were fully booked so we drove to the Winterthur, the ancestral home of Henry Francis Du Pont.
Henry Francis Du Pont was educated at Harvard and had degree in agriculture. He was an expert and collector of early American furniture and decorative arts and lived almost 90 years. He personally designed majority of the park at this 983-acre estate. He was seriously involved in dairy cows breeding and ror more than 40 years, he was recognized as a premier breeder for his herd of Holstein-Freisian cattle.
The magnificence of the grounds at Winterthur is perhaps exceeded only by that of its centerpiece, a nine-story museum housing some 90,000 examples of American decorative arts dating from 1640 to 1860. Installed in nearly 175 meticulously restored, period-accurate rooms, these rare objects — including silver tankards crafted by Paul Revere and a dinner service made for George Washington — form one of the largest treasuries of its kind in America. To house his collection, over decades Henry Francis Du Pont expanded his family estate from the 30-room house he inherited to a 175-room mansion.
We took a garden trolley tour from the visitor’s house to the main building. Our guide drove us through the landscape gardens majority of which were designed to look like a natural park and to have colors practically every time of the year. In the mansion we took a building tour, also with a guide. Our tour lasted about an hour and was very interesting. There were many pieces of the art and furniture in the mansion that had not only antique value but also a historical value. For example, there was Martha Washington’s mirror in one of the rooms. However, this main tour covered only about 10% of the total treasures. To see more you would need to go on one of several more tours that were available. Unfortunately, none of the tours offered at this time matched our interests so we did not take any. We spent more time around the Winterthur grounds. In one of the pavilions they had amazing exhibition of porcelain and silver soup tureens. It was so great that we even bought their catalog. 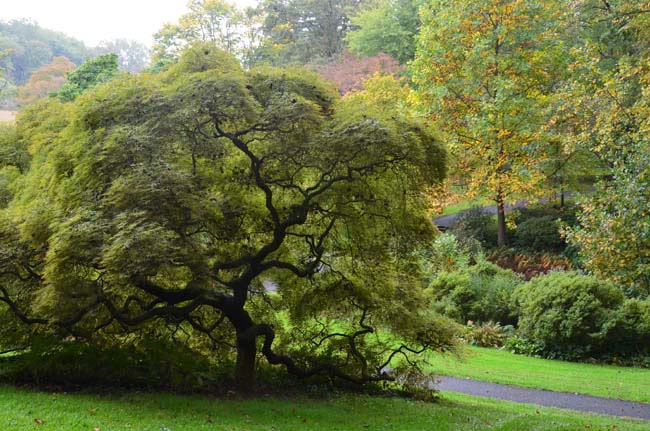